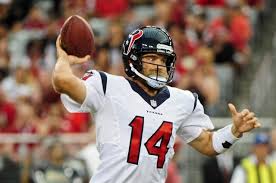 On Wednesday, QB Ryan Mallett was put on the Texans’ IR list, and now live betting services learned that Ryan Fitzpatrick will be the one to start when the team takes on the Titans on Sunday.

Fitzpatrick was the starter in the first 9 meetings with a record of 4-5, before he went to the bench during week off so Mallet could take his place.

“There’s a lot of times you don’t have that opportunity,” said Fitzpatrick. “Something was taken away from me, and I didn’t know if I’d get a chance to go out there and play again. So [there’s a] renewed sense of excitement and energy.”

The QB was very clear that it was a very difficult job after being benched. However, the player took it in a professional manner, like he said he would do. The player and his teammates want to get back a lot of what was worked on in his first time as a starting QB.

Fitzpatrick said: “All the experiences that have happened through my first eight or nine games, the timing with Andre [Johnson], DeAndre [Hopkins], the tight ends, DJ [Dennis Johnson], those guys, that stuff still carries over.”

The player said that there could have been some good aspects when looking at things from another angle. During the game, he saw the way that the plays are called and got a much better look at the offense.

“The last few weeks have been interesting, taking a step back and kind of watch the offense go,” said Fitzpatrick. “For me to go back out there, it’s kind of like a second chance for me, I guess. There’s a lot of times when you don’t have that opportunity, maybe. … I didn’t know if I’d have a chance to go out there and play again. Renewed sense of excitement, energy, whatever it is.”

The player is veteran in the NFL for 10 years, and live betting services saw that this season he threw for 1,960 yards with eight interceptions and 11 TD’s.

Also on Wednesday, the Texans acquired the services of free-agent QB Thad Lewis, who the Bills released during training camp. Tom Savage is the other QB for Houston.

Coach Bill O’Brien said that he isn’t sure who will be playing as backup between Savage and Lewis.

However, he did think that Fitzpatrick being absent for two meetings could have been of benefit to the player.

“[Watching] a guy that’s played in the system and a guy that knows the system in Mallett and sees how it operates with Mallett, that probably did help Fitz,” said O’Brien. “You could see signs of that [Wednesday] in practice.”