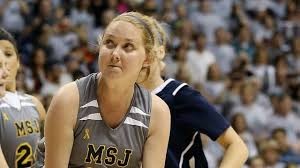 Lauren Hill showed us even though you are going through tough time you must keep your head up and stand for something. Lauren did just that. In her 19 years of life she may have done more than some have done in their whole lifetime. Lauren Hill was a brain cancer patient. Even though her brain every day grew and her brain was being compromised, she still showed fight. When a person is ill sometimes they have good days sometimes they have bad dies and Lauren was no different. She wanted to stand for something though. She dedicated her life to raising money for cancer research and left an imprint in everybody’s heart while doing so.

School president Tony Aretz stated Hill “taught us that every day is a blessing, every moment is a gift.” A coach read one of her essays about treating life as a blessing. “She’s made an impact on the world, more so than me — more than I ever will do,” her coach Dan Benjamin said. “I’ve gotten so many emails and phone calls from all over the world. People are contacting me because they want to share her story.”

Lauren Hill wouldn’t let her brain tumor dictate what she wanted to do and everyday woke up with purpose. and strength were an inspiration not only to those who knew her best but also to the millions of people she touched around the world by sharing her story,” NCAA president Mark Emmert said Friday in a statement. “Lauren achieved a lasting and meaningful legacy, and her beautiful spirit will continue to live on.”

She loved soccer but her calling card was basketball. After the disease advanced to the point she couldn’t use her right side. She had to teach herself to shoot with her left. 17 seconds in to a game where the likes of Pat Summitt and a cast of WNBA player on hand, Lauren catches and makes a lefty layup. She also made the last shot of the game for a right handed layup. It was thing of beauty. Everyone who watched her grit it out “We are forever grateful to have had Lauren grace our campus with her smile and determined spirit,” Aretz said. “She has left a powerful legacy. She taught us that every day is a blessing; every moment a gift.”

LeBron James also honoring Hill said “Obviously, it’s unfortunate. You never want anyone’s life to be taken away because of an illness. But I think she’s in a better place now. The everyday struggles that she had to deal with throughout her treatment and throughout her care [are over]. She’s in a better place now. The Man above doesn’t make any mistakes and while she was here on Earth, she inspired a lot of people.”