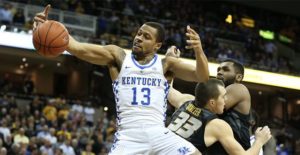 Kentucky survived Saturday night the toughest team they have played this tournament, Notre dame showed the world that this team is beatable and that it took a serious of unfortunate events for them to lose the match. That’s right Kentucky didn’t win the match Notre dame lost it. With less than five minutes remaining in the match, they held a 61 to 56 lead and couldn’t hold on to it.

The expressions on the faces of the Kentucky fans says it all, they were able to breath and celebrate only after Grant missed a three pointer at the buzzer. Once again Karl Anthony Towns came through for Kentucky leading them in the second half and ending the game with 25 points, five rebounds, and four assists two steals and a block. It took everything Kentucky had to hold off Notre Dame, come from behind and win the match in the final seconds. Kentucky outscored Notre Dame by making their nine final shots of the game including two free throws with seconds remaining.

Kentucky’s calmness and pizzazz when under pressure in the final seconds has them now advancing to the final four as only the 13th team all time to reach the Final Four undefeated. History tells us that out of those 13 teams, 7 teams have won the Championship, 2 runner-up and 3 ending their run on the semifinals.

Kentucky will now play Wisconsin a rematch from last year’s Final Four, the nation’s best offense going against the nation’s best defensive team. There is no better team to end with the 38-0 record than Wisconsin, they have the man power to do so with Kaminsky 7’ footer, Sam Dekker 6’ 9”, Nigel Hayes 6’8” and on the bench Duje Dukan 6’8”. These towers will not scare away Kentucky as they are bigger than most NBA teams but Wisconsin is one of the best teams in the country on the defensive glass and these players are extremely versatile as Hayes is an excellent 3 point shooter can dribble and over power small forwards, Dekker is a talented forward and Kaminsky has been a nightmare to defenses this tournament.

Wisconsin is not the best team left in the tournament but they hold the key to beating Kentucky, like Notre Dame ran their plan Wisconsin will also be able to spread the floor pulling Kentucky’s big men away from the rim and use their speed and power to put them is situations that they are not used to defending.
This match up would have been the perfect ending for the tournament’s Gran Finale, all Sportsbook software services and live betting services are calling this the “Final Four rematch we deserve to see”.