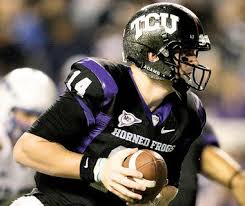 TCU ‘s fans found out that the team’s decision on a starting quarterback will not be made before Saturday, when the Horned Frogs take on Samford in their season opener.

On Tuesday, Gary Patterson said that both senior Matt Joeckel and junior Trevone Boykin are set to play against Samford, leaving many fans wondering who will be the one to ultimately get the role.

“We’re playing two quarterbacks,” the coach said, as reported by the Associated Press. He also said that both players were doing fine when they were holding practice.

But the coach said that one of them was doing a better job that the other in the Horned Frogs’ scrimmages, and would be chosen to get the season’s first snaps, but he was not willing to say who would take the QB position.

Joeckel moved to TCU after getting his degree at Texas A&M, and the player spent many seasons as Ryan Tannehill’s backup, and fans also saw that he backed up Johnny Manziel.

Last season, Boykin was in a similar struggle with Casey Pachall, who left the team, finishing the season with an average of 6.8 yards-per-attempt, a touchdown-to-interception ratio of 7-to-7, and 198 passing yards.

Joeckel’s chance of getting the role could be better if Sonny Cumbie, offensive co-coordinator, and Patterson decide that it would be better for Boykin to be used to help out TCU’s wide receivers. However, the Associated Press reported that Patterson said that this week Boykin would not be a receiver.

TCU’s fans will have no choice but to wait to find out who will start at quarterback for the Frogs, and this could take a few more weeks, depending on how the players look when the team takes on the Bulldogs on Saturday. In the first four games of the season, there will only be two games at hand for the Frogs.

Live betting fans are anticipating a very good season for TCU, and can’t wait to see who will be picked as the team’s starting quarterback.