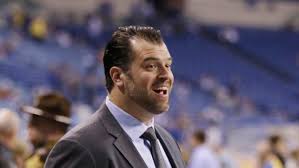 On Thursday, Colts GM Ryan Grigson publicly admitted for the very first time that the team talked to the league about their worries regarding the balls used by the Patriots the week before the championship game of the AFC. NFL fans and live betting services continue to be surprised by the emerging events of this very controversial affair, and would like to see what will ultimately happen.

“We went into the game, we had some issues, we’re going to do what we can and that’s participate with the league and the investigation and wait until the Wells report comes out,” said Grigson.

And many fans are very eager to see what the report has to say.

When Grigson spoke at the league’s combine, he didn’t mention what made him talk to NFL officials days prior to Indianapolis losing to New England 45-7, in a game that proved to be very controversial after the “Deflate-Gate” fiasco.

It was reported that Indianapolis noticed that a football was underinflated when they played against New England, after a pass by QB Tom Brady was intercepted by LB D’Qwell Jackson. Last month, while Jackson was at the Pro Bowl, the player said that he didn’t see that the ball was underinflated, something that added even more confusion to the matter. In the game’s second quarter, Grigson spoke to the NFL about his worries regarding the ball, and many were paying close attention to what he had to say.

The investigation is being led by attorney Ted Wells, and the probe continues.

“We had concerns, and just like any general manager would do, he wants their team to play on an even playing field,” said Grigson.

“We took the proper steps to try to ensure that. It’s up to the league to make sure that happens. Again, if rules were broken, we’ll see. If not, that’s what the investigation is for. We’re just doing our jobs and try to give our team the best chance to win on a level playing field.”

Indianapolis coach Chuck Pagano said that ever since the accusations were made, he did not speak with New England coach Bill Belichick.

NFL fans can see that this fiasco is still not over, and developments on “Deflate-Gate” will still be closely monitored by live betting services. Hopefully things will clear up soon enough, for the sake of the sport and the fans.