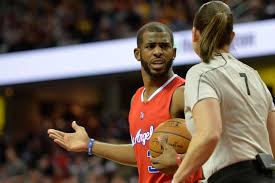 Chris Paul, point guard for the Clippers who’s a big favorite with online bookmakers around the world, was given a $25,000 fine after he publicly criticized Lauren Holtkamp, a first-year referee who earlier in the week gave the player a technical foul.

On Saturday, the fine was announced by the league – two days after the guard criticized the referee following the team’s defeat by Cleveland.

“Some of [the technical fouls] were ridiculous,” said Paul. “The tech that I get right there was ridiculous. I don’t care what nobody says, I don’t care what she says; that’s terrible. There’s no way that can be a tech. We try to get the ball out fast every time down the court, and when we did that, she said, ‘Uh-uh.’ I said, ‘Why, uh-uh?’ And she gave me a tech.

“That’s ridiculous. If that’s the case, this might not be for her.”

The comments made by Paul started plenty of discussions on whether he was disrespecting Holtkamp because she’s a woman, something that led to a reproach by the referees union on Friday, as well as plenty of debates with many fans and experts.

However, a source reported that the NBA, upon making its review, did not see the comments made by the player as ones ‎based on her gender, but still decided to give Paul the fine due to heavy criticism by the fans.

On Friday, the guard was trying to clear up what he did, saying that it “was about a bad call.”

In a statement released on Friday, Michele Roberts – executive director of the NBA Players Association – also defended the player.

“Any suggestion that Chris Paul would ever conduct himself in a disrespectful manner towards women is utterly ridiculous, outrageous and patently false,” said Roberts. “His personal management team, which includes several accomplished women who play a major role in virtually all of his business affairs is, alone, evidence of that fact. … Without hesitation, the Players Association stands firmly behind Chris, whose competitiveness may only be exceeded by the strength of his values and his convictions.”

There is plenty of controversy regarding the player’s intentions, as there are many fans out there who believe that he reacted the way he did due to the referee’s gender, and others who think differently. Online bookmaker will continue to follow this situation, and would like to see what will ultimately happen once the dust settles.