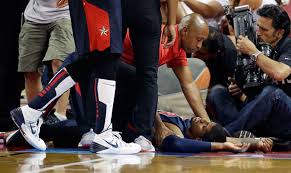 Larry Bird, Pacers president, would like to see Paul George hit the court again this season after the player suffered a broken leg last summer in a horrible accident. Sportsbook software services found out that he could return to action as soon as March, and the fans are very hopeful to see this happen.

On Tuesday, Bird spoke with the media, saying that if doctors give George the green light to return to action, he would definitely like to see him play.

“It seems like every week Paul is getting better and better,” said Bird. “So if we do have an opportunity to get into the playoffs and [George] can get some games under his belt and get ready to go next year … I always say if a player is ready to play, they gotta play.

“We’re not going to hold him back if he’s able to go out there and play. When you’re out like that, you lose something. … I still think it’s important if he’s able to play, he should be out there.”

George – an All-Star on two occasions – was not able to play since the 1st of August, when his right leg suffered a compound fracture that concerned NBA fans everywhere. Bird said that he was informed about the player’s recovery time, and he said that seven months would be the time for him to fully heal from his very setback.

Frank Vogel, Pacers coach, did not speak about the player’s workload while holding practice, but he was definitely more active. The coach said that getting into the game’s rhythm and being in optimal shape could mean that the player could have to add one more month to the time that he will need to recover, but he was in agreement with Bird.

And George himself had something to say, as on Tuesday the player used Twitter to mention a possible return date, saying that it could be on March.

George’s fans are knocking on wood, hoping to see the player return to the court as soon as possible, even if it takes a bit longer than March, they’re ready to wait, as his health comes first. Sportsbook software services also hope to see he player make a swift recovery, and will closely monitor developments on his progress.