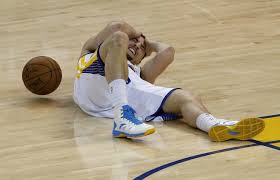 Klay Thompson, Golden State Warriors shooting guard was said to have experienced concussion symptoms after Wednesday’s series clinching Game 5. Online Bookmaking Solutions who has the series price at -240 Warriors, comeback +200 had these two the favorite to meet up in the finals, but the injury can change a few things. Klay Thompson left the game after being kneed in the ear by Trevor Ariza causing a laceration in the 4th quarter. He came back to the game after getting stitches but was not feeling well after the 104-90 win.

According to statement released by the Warriors “Klay Thompson was evaluated by the Warriors medical staff immediately after suffering an injury during tonight’s game and was put through a concussion evaluation,” the team said. “At the time he did not show any concussion-like symptoms. After the game he began to not feel well and developed concussion-like symptoms. He will continue to be evaluated by the team’s medical staff tonight.”

Thompson said in a televised postgame interview that he was “feeling a little dizzy,” before adding, “We got a week off — or close to it. I’ll be all right. I’ll get my health back.”

Pay Per Head Solutions have the line at Warriors -6 for Game 1 of finals. Klay gave Ariza a shot fake that which led to the injury. Blood coming out of Thompson’s ear was what prevented Klay from coming back to the game. He needed stitches to close the wound.

“He was definitely shaken up. We’ll evaluate him tomorrow. It was a bizarre night for him,” Warriors coach Steve Kerr said in his postgame news conference before Thompson’s concussion-like symptoms were revealed. “Huge first half that really got us going, and then I left him in too long, he got his fourth foul and I thought I’d buy one possession, see if we could get him a shot, and when he picks up his fifth and when I do bring him back, he immediately gets hurt and out for the rest of the night.

“The break will be good for him. It’ll probably be good for all the guys with the run we’ve been on, but especially for Klay.” Will the Warriors with first year coach Steve Kerr be champions, we shall see.