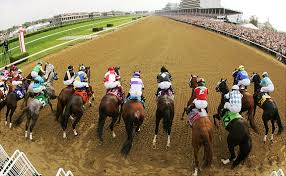 It’s Derby Week in Kentucky, and that means getting ready for the run for the roses on Saturday. Kentucky Derby odds are up for the 17 horses that will be participating in the 12th race of the day, with a purse valued at $1,425,000.

As far as the Kentucky Derby odds go, trainer Bob Baffert seems to have knocked it out of the park by having two horses that he has been training, American Pharoah and Dortmund, at the top of the heap Last year he was only able to enter one horse, Chitu, a long shot at 25-1.

Of course the horse racing odds will change based on where the horses are placed at the gate, but for the time being, American Pharoah and Dortmund have been showing well in previous races, and remain the top contenders.

The first leg of the Triple Crown should have approximately 15 million viewers tune in for the 2 minute race. Last year’s 140th running had an estimated 15.3 million viewers on NBC, and this year could beat that number.

Last year’s Derby winner was in fact the favorite to win on the Kentucky Derby odds prior to the race. Trained by Al Sherman, California Chrome was a 2-1 favorite.