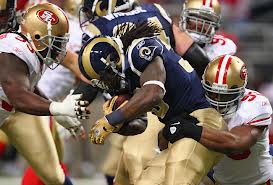 The Rams were just able to break a losing streak of three games ATS and SU when they took out the very famous Super Bowl winning Seahawks – something that left many Live betting fans in a state of disbelief.

Now the Rams will do everything they can to not lose on Sunday when they visit the Chiefs, who are 3-3, at Arrowhead Stadium.

It seems as if it’s been a while since the Rams were able to win as the underdogs on-the-road with seven or more points, and that’s because it only took place two times in the team’s last 28 games in this position.

Kansas City’s betting line opened with the Chiefs being the favorites by six points, and 44 was the total.

St. Louis were just able to take out Seattle 28-26, and many experts in the NFL believe that after this win, they could beat Kansas City. Last week, the Rams played like there was nothing left for them to lose – they made a very smart punt return for a TD, and then won the game thanks to a fake punt.

St. Louis was also able to get a passing performance of 18-of-21 from Austin Davis – their replacement QB who in his last three meetings threw six passes for a TD versus an interception.

This season, the Rams are just 2-4 both ATS and SU, but in the team’s last five meetings, they were able to take out the Bucs and Seahawks, lost to the Cowboys by a field goal, and against the Eagles by a TD. They were also able to give the 49ers a very difficult time on the field.

RB Jamaal Charles played his season’s best game as the player rushed for 95 yards, and Kansas City’s defense, which has a ranking of 10th overall in the NFL, held Chargers QB Philip Rivers to what could be his season’s worst game. The Chiefs are now 4-1 ATS and 3-2 SU on their last five meetings, and many Live betting fans are very eager to see how they will perform when they face the Rams.

Green’s toe is improving, and the fans are optimistic

Not many fans back the Raiders to beat the Browns

Baldwin believes that the Seahawks were affected by Harvin’s trade