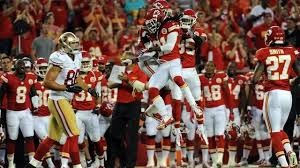 The Chiefs are a bit of a mystery team as the new season approaches, as a year ago they went 9-7, beating the Patriots and the Seahawks in the process. But pay per head sportsbooks saw that they didn’t make it to the NFL postseason, leaving many disappointed fans. Kansas City can blame a lot of their problems on their injuries, including inside LB Derrick Johnson’s injured Achilles, as well as RB Jamaal Charles’ ongoing problems to the leg. Johnson was injured in Week 1 of the regular season, and the player was not able to feature for the whole season. It also isn’t guaranteed if he’ll be able to return to action this time around. Considering this, local bookies gave the Chiefs 16/1 odds to be the winners of the AFC Conference, +400 for the AFC West, and 33/1 for the Super Bowl.

Even though Kansas City had plenty of problems, they were still able to win 9 matches. A lot of the credit can be given to their defense, which has a league ranking of second place both in scoring defense and against the pass. Outside LB Justin Houston almost tied Michael Strahan’s NFL record of 22.5 sacks – by a half-sack. In Kansas City’s defense, Houston did a great job shutting down offenses. Tamba Hali, Josh Mauga, Houston, and a Johnson who’s completely healthy, were all able to give the team what was one of the NFL’s top linebacking corps. It still isn’t known if safety Eric Berry will be back in action after his Hodgkin’s lymphoma diagnosis. The player is set to fully recover, but he might not be fit for football this season. The Chiefs got the services of CB Marcus Peters and safety Tyvon Branch to improve their secondary.

The Chiefs have a very solid offense. They have QB Alex Smith in their ranks – a veteran who was able to throw for 18 TD’s against only 6 picks. The player was also able to finish more than 65% of his passes, for 3,265 yards. Although Charles was injured, he could still record 1,033 yards rushing with 9 TD’s. However, the Chiefs turned into the league’s first team since the NFL/AFL merger to not have a TD pass sent to a WR. This should not happen with WR Jeremy Maclin. Last season, the player was able to record 85 receptions made for 1,318 yards and 10 TD’s with the Eagles.

In order for the Chiefs to challenge predictions for the Super Bowl, they must be able to complete with the Broncos. They’re set to take on Denver in the regular season’s Week 2, and the Packers come next. However, pay per head sportsbooks can see that the team’s schedule won’t be as tough as the season progresses, and that’s the reason why Kansas City could have a very good chance of making it all the way to the postseason. Bookies in Las Vegas are also well aware of the Chiefs’ schedule, and even though they continue to be an enigmatic team, the odds that they got for wins in a regular season are currently at 8½ over (-130).