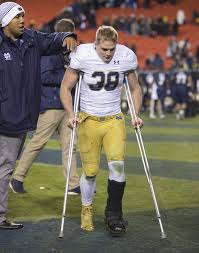 On Sunday, coach Brian Kelly said that Notre Dame will be playing without the services of Joe Schmidt -starting middle LB – for the season due to a left ankle that was dislocated and broken, and Live betting fans seriously hope that this won’t set back the team’s performances for upcoming games.

The player was injured in the third quarter of the game between Notre Dame and Navy, where the Fighting Irish won 49-39. On Tuesday, the player is set to receive surgery.

Schmidt proved to be key in defense, as he was played a big role in calling most of the team’s plays, and he almost never left the field. This season, the player was one a big surprise in Notre Dame’s defense, which has a ranking of 28th in the nation when it comes to scoring average (21.6 points per game) and the player was able to help the Irish have a 7-1 start.

Schmidt, who is 6-foot-0.5, and weighs 235-pounds, is leading the Irish in tackles (65) and has three QB hurries, two forced fumbles, and two interceptions. The player had one eligible year remaining, and Kelly said that in 2015 he’s expected to be back in action.

“Yeah, he’s a big loss, but I think our guys understand that it’s a next-man-in, and let’s get young guys ready to roll.”

Late on Saturday, Schmidt’s place was taken over by Nyles Morgan, and many experts believe that he will be the perfect replacement, considering his record and his talent. Kelly said he has not decided who will be the defense’s main play-caller.

“Certainly it generally has a leadership component relative to understanding all of the fronts and adjustments and clearly getting people lined up, so the complexities are that that position generally takes on that leadership role,” Kelly said of the middle linebacker position. “If it’s not — in other words, if its given to somebody else — the mike linebacker position can be as easy as you make it. You can be a single-gap run-supporter. You can be a hook player and you can make it really easy.

“We’re certainly going to have to take some of that load away from Nyles and really kind of disperse it to others because we’re not going to heap that all on him. We obviously felt good about putting all that on Joe’s plate. We’re not going to be able to do that with Nyles.”

This Saturday, Notre Dame is set to take on Arizona State, in a game that many Live betting will not want to miss.