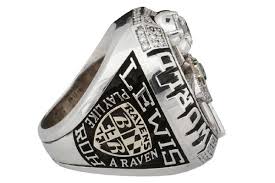 On Sunday morning, a Super Bowl ring that was given by Stephen Bisciotti, owner of the Ravens, to ex-RB Jamal Lewis was put in an auction, and online bookmakers learned that it was sold to a Maryland collector for $50,820.

The ring that was sold was from the time that Baltimore beat San Francisco in Super Bowl XLVII, a game in which Lewis did not participate, and won’t be forgotten any time soon. However, Bisciotti has given rings before to very famous Ravens stars, which include Lewis, who in 2012 became a part of the Ravens’ ring of honor.

“Jamal is one of the all-time Ravens greats,” said Ken Goldin of Goldin Auctions – the ones who sold the ring. “This ring was hotly contested and we saw a lot of interest from Ravens fans.”

The Super Bowl ring was made from 3.75 carats of diamonds and 10K of white gold, and a pawn shop consigned the ring – which was sold by Lewis – to auction it.

In 2000, the former player was drafted, and during his year as rookie he was able to lead the team to a Super Bowl win, impressing fans everywhere along the way. Lewis played with Baltimore until 2006, before he finished off his career alongside the Browns.

In 2012, he decided to file for bankruptcy, and this took place three years following his retirement from the sport.

In the auction, another ring that was sold worthy of notice was the AFC title ring of 2008 that Matt Estrella got from the Patriots. Estrella was the team’s videographer who in the “Spygate” fiasco filmed the defensive coaches of the Jets. The ring, which got $16,940, is made out of 10K gold and was embedded with 55 diamonds.

NFL fans can fully understand why the ring was in such hot demand, and can see why the rest of the items were sold at such high prices. After all, they are part of history, and the prices could go up even higher in the future, so if there’s the money to buy them, there could be a profit.