Hockey Betting: Canadiens move on in the Stanley Cup Playoffs 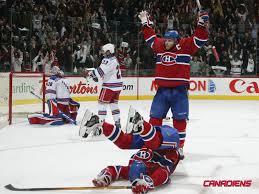 With two towns so close, you can imagine there is quite a hockey betting rivalry between them. Sunday night the Montreal Canadiens put the Ottawa Senators to bed by winning the game 2-0 and the series 4-2, moving on to the next round in the Stanley Cup Playoffs.

Although there may be some bad feelings between these two Canadian teams, there is no denying that the Senators had one heck of a year, finishing off the regular season with 99 points and a 43-26-43 standing, and landing a wild card spot.

Ottawa in Ontario, and Montreal in Quebec may only be a couple of hours apart, but fans of the Senators and Habs were quick to tweet their rivalry on Twitter, with some hockey betting fans calling the shots.

“Puck hit Price’s pad and bounced out, yet no whistle. The referees are learning,” tweeted Monado Classic.

Je me souviens, or I remember, is the motto and license plate tribute for the province of Quebec, and it looks like Habs fans should remember some bad times in the Stanley Cup Playoffs, specifically when they beat the Pittsburgh Penguins in 2010 in the final game of the second round. The city erupted first in joy, and then into a riot in which 25 people were arrested.

Some fans were truly happy to be part of the action and Andrew Coyne tweeted, “off the fence and cheering for Sens this period. Gotta love an underdog, plus who doesn’t want to see a Game 7 in this series?“ Alas, it was not to be.

Another fan with an apropos name, Bonk’s Mullet, had a good positive twist on the game. “Can’t forget that Ottawa had the biggest comeback in NHL history to make the playoffs. Couldn’t have been more fun.”

Well, that’s what we like to hear in hockey betting fans. Let’s hope that whichever team the Habs are up against, their faithful fans will try to keep an air of decorum this year.

Keep the tweets coming and get your foam fingers up in the air and cheer on your team to win the Stanley Cup Playoffs.