Former Hawaii coach says that the school owes him over $1.4 million 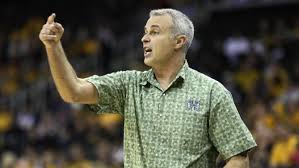 Gib Arnold, who used to be the basketball coach at the University of Hawaii, is currently debating charges that were made against him in an NCAA allegation notice, saying that he’s owed over $1.4 million by the university – something that surprised bookmaker software services, and they’d like to see what will come out of this dispute.

The NCAA says that the former coach acted in an unethical manner and intended to influence others to get misleading or false information involving violations in the time that he spent with the school’s basketball team.

Arnold said that the $1.4 million owed to him by the school as termination payment will give him the needed resources to contest the allegations made against him. He said the deal made with the school sees him entitled to an amount of severance pay that equals to what he accumulated since his deal started on the 1st of July of 2011, as reported on Wednesday by the The Honolulu Star-Advertiser.

The former coach said that he will be fierce in his defense against both allegations made against him – and these are categorized as Level I, which are the harshest.

On the 28th of October, Arnold was fired from the school’s basketball team after plenty of problems.

Ben Jay, the school’s athletic director, refused to comment on the matter.

“UH decided they would rather pay me the contract price — three and a half years’ salary and bonuses totaling over $1.4 million — to terminate me ‘without cause’ and pay nothing,” said Arnold. “That decision, made when the athletic department was already millions of dollars in the red, tells you the university did not have confidence that the facts they heard amount to cause for dismissal.”

In the case that the accusations against the former coach are sustained, he could be suspended from coaching in the future at organizations of the NCAA.

Arnold has 90 days to get his defense ready, and he said that it will be set within that time.

College basketball fans around the country were sad to learn about the problems between the coach and the school, and bookmaker software services just hope to see things somehow settle down – for the sake of the team and the fans.