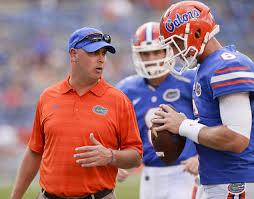 On Wednesday, Florida coach Will Muschamp decided to use Treon Harris as the Gators’ starting QB, and many football betting fans can’t wait to see how he’ll perform in this position.

Harris will be the one to take the place of Jeff Driskel, who was having a very tough time in the last four games that Florida played.

“[Harris] is getting all the reps right now,” said Muschamp, “and Jeff is certainly going to have a role in that game.”

Florida (3-3, 2-3 SEC) are leaving two losses in a row, and these include a very bad 42-13 defeat to Missouri that saw Driskel jeered by many fans, as they were chanting “Fire Muschamp”, prior to the game’s third quarter, when they were going towards the exits.

In the final 14 quarters played by Driskel, the player made 12 turnovers, as Harris sparked the team’s offense with prolonged playing time during the fourth quarters of the games against the Tennessee Volunteers and Missouri Tigers.

The player ended up being suspended the week after he was able to lead the Gators to a 10-9 win against the Volunteers after there was a police investigation involving sexual battery from another student of the university. Football betting fans saw that after the victim decided to take away her complaint, Harris went back to the team after five days.

After he sat in the coaches’ booth on October 11 for the game against LSU, the player took on Missouri, and for 98 yards he was 8-of-12 passing with an interception and a TD. The player also ran for a TD and lost a fumble on a sack in the first quarter

“You saw what he did late in the game,” said Muschamp. “He has a knack for making plays and making some good things happen for our football said team. We’ve struggled with production at the quarterback position, and that’s been an issue for us along with others. Been a huge issue for us.

“He’s got a much better understanding as we continue to move forward. We’ve got an open week now where he’s getting a bunch of reps. Jeff’s still going to have a role on our football team as a quarterback. Right now we feel like that was the best move moving forward.”