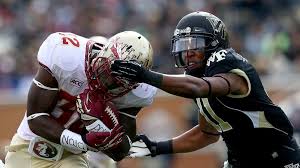 On Saturday, Florida State, a team with a winning streak that impresses fans and local bookies alike, will do everything they can to avoid losing a game when they take on Wake Forest.

Florida State were able to bounce back from a deficit of 17 points when they faced NC State, extending to 20 games the nation’s longest winning streak. However, in a recent poll made by USA Today, the Seminoles were beaten by Alabama.

“I’m very proud of where we are, I like the development of the team,” said coach Jimbo Fisher. “I’m very excited to see where we go from here, I really am.”

Wake Forest ended up losing two of the last three meetings so far this season, and the Demon Deacons’ latest defeat was to the Louisville Cardinals at 20-10. In Tallahassee – where they were only able to win on three occasions since 1959 – Wake Forest will try to put an end to their seven-game losing run while on the road there, but this job could prove to be very difficult, if not nearly impossible.

“It certainly doesn’t get easier this week as we’re going down and playing the defending national champions,” said coach Dave Clawson. “They are loaded on both sides of the ball.”

DE Tyler Harris did a great job on the field when he took on the Cardinals, and was able to set a record in the FBS with three recoveries for fumbles, which include one for a TD. QB John Wolford was seriously struggling when he faced Louisville, as he finished with only 122 yards and three interceptions thrown.

Wake Forest happen to have one of the nation’s worst rushing teams, and last weekend they could only finish -22 rushing yards.

Back to the Seminoles, the one-game suspension that Jameis Winston got is now over, and the player was able to complete 26 out of 38 passes thrown for 365 yards and four TD’s when Florida State took out NC State 56-41.

Local bookies saw that 11 passes were caught by WR Rashad Greene for 125 yards and a TD. Many fans also saw that so far, Karlos Williams’ best performance was made in their game against the Wolfpack, as the player was able to rush for 126 yards and three TD’s. The Seminoles were able to win four of their last five games against the Demon Deacons. Three defensive TD’s were made this season by Wake Forest.

Many fans and experts believe that Florida State should have a very easy win against Wake Forest, but what will happen on the field when both teams face each other is yet to be seen.