Emmanuel Adebayor wants to get a starting role with Spurs 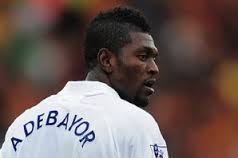 Emmanuel Adebayor is pleased to have to struggle for a starting role with Tottenham after a switch to West Ham on loan failed to materialise, and online bookmakers know that many Spurs fans are more than happy to see him stay at the club.

Tottenham didn’t allow the striker make a loan move to Sam Allardyce’s side.

On the day of the deadline, the player was set to leave Spurs. Both QPR and West Ham were eager to get the famous forward’s services.

The move that the 30-year-old was going to make from White Hart Lane to Boleyn Ground was blocked later on, because Daniel Levy, Spurs chairman, seemed to not be willing to send the player on loan to a rival club, but the decision doesn’t bother Adebayor.

“I am staying here, and I am happy to stay at the club and do my job.”

And online bookmakers were pleased to learn that the player doesn’t seem to be troubled at all by the decision.

“Everything happened in the last 48 hours, although the window was open for a month.

“The club decided to send me out on loan, which I was pleased with, and there were five good clubs who were interested, so I narrowed that down to three and then one that I wanted to go, but Mr Levy was against that because it was a rival club.”

The striker wants to be in good terms with Spurs fans, who criticised a loss of 2-1 to Stoke City in November at home, as he believes that his post-game comments were manipulated by reporters.

“After the game I was a little upset about the way we played and everything and I spoke to some of the journalists and I gave them some answers and they twisted it,” said the striker, who did not play for two months following that meeting.

“They [Tottenham’s fans] had a bad interpretation of what the journalist put in but I think we have to forget those things and we have to move on.

“I said clearly I did not mean to hurt anyone because at the end of the day I understand how much they pay to come and watch.

“If anyone thinks I am not appreciative of their support then that is a lie. They are the ones that make me run more, that make me want to score goals. Saluting a goal in front of the fans is one of the most beautiful moments in a player’s life.”