Dwight Howard to have MRI on knee 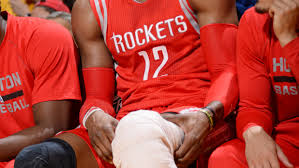 Dwight Howard, Houston Rockets center is scheduled to undergo an MRI exam on Wednesday to determine the extent of his bruised left knee. Howard suffered the injury in the first quarter of Game 1 against the Golden State Warriors o Tuesday night.

Howard played 26 minutes and finished with 7 points and 13 rebounds. Howard isn’t sure if he will be ready to play for Game 2.

“It’s very painful,” Howard said after the Rockets’ 110-106 loss. “I tried to play it off as much as possible, but I couldn’t give my teammates what I needed to give them.”

Around the halfway point of the first quarter Josh Smith crashed into Howard’s left leg after a missed shot attempt. After the hit Howard stayed face down on the floor for a few seconds and slowly got up. He tried to walk it off but it seemed that the pain was too unbearable.

Howard left to the tunnel and Clint Capela was called upon to fill Howard’s shoes. Howard did return for the second half and played nearly 9 minutes going 0-2. It was clear that he wasn’t himself moving gingerly around the court. Coach McHale took him out with a minute left in the third and never brought him back in. Pay Per Head Solutions and Price Per Head Services have the Houston Rockets at 25/1 and this injury doesn’t help.

Howard has dealt with his share of knee issues. During the regular season he was out nearly 2 ½ months with swelling in his right knee. In total Howard missed 41 games. In the postseason Howard has been a force, averaging 17.2 points per game and a payoff leading 13.8 rebounds per game.

The Golden State Warriors went small ball and Draymond Green had a field day at center. I wonder what McHale has up his sleeve as the ball’s in his court now.