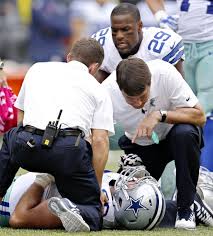 The Cowboys’ fans and pay per head agents learned that RT Doug Free fractured his foot and won’t be able to play 3 to 4 games for the team.

The player probably would have had to receive surgery if there was substantial damage to his ligaments, but it was reported that he will be wearing a walking boot instead.

On Tuesday, Cowboys general manager and owner Jerry Jones said that since Free is not playing in a skill position, there is hope that the player will be back in action earlier.

Jermey Parnell will be the one to take the place of Free, and many fans hope that he does a proper job on the field when he steps up for him.

“Got a lot of confidence in him,” Jones said on Tuesday. “We really do, although I don’t want to take anything away from Doug Free. His leadership … He’s the daddy in that offensive line room and he’s also playing very well this year. But Parnell is capable of coming in and playing well, too. He’s got a lot of talent. He’s just got to not make mistakes.”

Parnell is currently struggling with an injury to the rib that last week had him limited in practice. As Free is absent from the game, Donald Hawkins, who was not active for the team for their initial six meetings, would be the one to take the role of backup tackle.

Jones mentioned that Dallas are not looking to put right guard Zack Martin in the tackle position. At Notre Dame, he was left tackle, but the player did not feature as tackle since the first round, when he was drafted by Dallas.

Pay per head agents found out that adding someone from the practice squad of another team or trading a player was all but rejected by Jones. The team’s practice squad have the services of John Wetzel as a tackle.

“Right now, Parnell is our answer,” said Jones, “and a good one.”

And many fans believe that he could very well be the right man for the job.