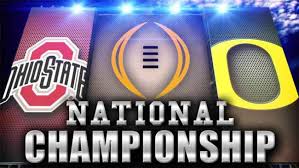 After they clinched a win at the Rose Bowl by 39 points, Oregon, who are number 3, are the favorites by a TD over Ohio State for the national championship game taking place on the 12th of January. While being led by the very famous QB Marcus Mariota, who recorded 338 passing yards as well as three total TD’s, the Ducks defeated the Florida State Seminoles 59-20 when they faced each other in the playoff semifinals. Bookmakers in Las Vegas and many live betting services see them as the favorite team to clinch the first national title in the history of the school.

Oregon, led by Mark Helfrich, who’s the head coach for a second year, are in a bid to win the championship game. Last time that they tried to win it was in 2010, when the Ducks took on Auburn and lost 22-19 in an effort to win the BCS championship, which has now been discredited.

The Buckeyes recently impressed many fans when they beat Alabama 42-35, with the Crimson Tide being the favorites by nine points. RB Ezekiel Elliott did a great job on the field with his TD for 85 yards in the fourth quarter.

What gave the Buckeyes an even better performance was QB Cardale Jones, who had a total of 243 passing yards and one TD with another 43 ground yards against Alabama’s offense – which is ranked at sixth place – in what was the second time that he started in his career in college.

Ohio State, who have one of the top programs in the history of college football, are looking to clinch their first national title since their flawless run (14-0) in 2002. That year, the Buckeyes beat the Miami Hurricanes 31-24, but in 2007 they ended up losing to LSU the last two national title clashes, and in 2006 they were beaten by the Florida Gators.

When comparing the statistics made this year by each side, they seem to be matched in a pretty even manner. In the country, the Ducks were sitting at second place with 47.2 PPG, and Mariota recorded 40 TD’s and rushed for an additional 15. RB Royce Freeman was able to record 1,343 yards and 18 TD’s, and in the Pac-12, the Ducks’ defense was at second place allowing 22.5 PPG.

The Buckeyes are able to match the Ducks’ offense with the country’s 5th ranked offense, recording 45 PPG and the team’s defense were also able to hold the teams that they faced to 22.1 PPG. After Jones, Ohio State have the services of Elliott and the 1,632 yards and 14 TD’s that he recorded, as well as WR’s Michael Thomas and Devin Smith. During the regular season, both players were able to combine for 21 receiving TD’s, and they were each able to score once against the Tide.

Coach Helfrich was very successful since 2013, when he took over Chip Kelly, with an overall record of 24-3 with a couple of wins at a bowl, but the Buckeyes’ Urban Meyer could outmatch him.

Meyer was the one to take over an Ohio State program that was hit hard by NCAA sanctions and in 2012 they had ban in the postseason. Live betting services saw that this season, the coach had a record of 37-3 with a title in the Big Ten. On the national stage he also has plenty of experience, as in a span of three years he was able to clinch two national titles with Florida.