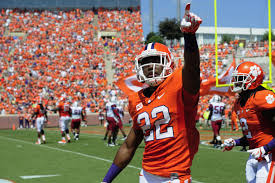 Clemson – ranked at 24th place – will go to Boston College to take on the Eagles. Local bookies saw that the Tigers were able to beat Louisville 23-17 in a matchup at home in week seven, and they had to have a late stand at the goal line so they could keep the win. Clemson won even though QB Deshaun Watson suffered a broken finger and will sit out. This could create plenty of problems for the Tigers, who in passing offense are ranked 19th, and in points scored they’re 25th, with 37.5 points in each game played.

Boston College surprised many in the football world, as they got off to an overall start of 4-2, which include a mark of 1-1 in ACC Conference action. In week 7, the Eagles were able to handle the NC State Wolfpack very well, and on the ground they were able to outgain the team 310-43 while on their way to win of 30-14. With 132 yards, QB Tyler Murphy was the one to lead BC when it came to rushing, and these include 47 and 27 yard TD runs. With 29.7 points-per-game, the Eagles now rank 70th place when it comes to scoring, and 5th on rushing yards, as they were able to record 315 yards-per-game.

Many local bookies believe that the only chance that the Tigers have to get a road win is if they’re able to stop their opponent’s running game. So far, this proved to be a strong point for Clemson, as in rush defense they have a ranking of 11th place in the nation, with 100.5 yards-per-game allowed. This season, the Eagles were able to properly defend the pass, and they’re ranked 18th in that area.

In this game, the Tigers could find themselves in a very tough position. Clemson won’t have the services of their starting QB, and will take on a BC side that this season already had a home win against USC. Many experts believe that the Eagles’ offense won’t be able to produce enough in the game to win, but will give the Tigers a very hard time on the field.

Will Texas A&M stand a chance against Alabama?