Carroll now knows how to handle footballs before a game 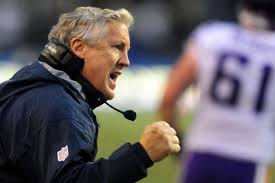 Pete Carroll, Seahawks coach, said that the “Deflate-Gate” fiasco with the Patriots will completely change the manner in which he will handle the procedure from now on, and sportsbook software services believe that not only him, but many other coaches, will pay much more attention to how footballs are prepared and picked before a game.

“I’m much better versed today than I was a week ago,” the coach said on Sunday. “Things come up and we have to face things, sometimes for a first-time realization. Maybe everybody would think you should have seen it before, but I hadn’t checked on the whole process of how our footballs were handled until this week.

“I can empathize with [New England] coach [Bill] Belichick in that way and understand that he never has, either. It’s something that was part of the equipment standards that was carried out by people in the organization. It’s something that hasn’t been looked at, maybe, as technically as now. But I know every step of it now.”

The Seahawks’ coach said that this week he was learning how the footballs are prepared and chosen prior to a contest.

“My awareness is up,” said the coach. “I’m sure everyone else’s around our game will never be the same because of what just happened. It’s an unfortunate situation that [the Patriots] have to deal with now and I’m sure they are doing everything they can to deal with it properly. It’s not an issue for us other than our awareness is increased. This is just another opportunity for us to grow.”

He also said that he’s not expecting New England to lose their concentration this week due to this fiasco.

“I think it’s common when you feel like you’re under attack it draws you closer,” said Carroll. “I would suspect those guys will rally together. We understand it’s a distraction they don’t want, but I’m sure they’re handling it in the best way possible. That’s all you can do right now.”