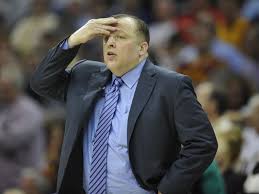 The Chicago Bulls fired on Thursday, Tom Thibodeau, despite him reaching the playoffs all five years of his tenure. They fired the coach saying there was a change needed. Thibodeau whose team was eliminated by the Cleveland Cavaliers had 2 years and nearly $9 million remaining on his deal.

Thibodeau the 2010-11 NBA Coach of the Year had a winning percentage of .647 in the regular season going 255-139 per Bookmaker Solutions. This was done without star point guard Derrick Rose who only played 181 of 394 games due to injury per Online Bookmaking Solutions. But sources say the Bulls was still displeased with his inability to beat an injury-plagued Cleveland and team and a lack of offensive flow to match their defensive tenacity.

“The Chicago Bulls have a history of achieving great success on and off the court,” Bulls chairman Jerry Reinsdorf said in a statement announcing the firing.
“These accomplishments have been possible because of an organizational culture where input from all parts of the organization has been welcomed and valued, there has been a willingness to participate in a free flow of information, and there have been clear and consistent goals. While the head of each department of the organization must be free to make final decisions regarding his department, there must be free and open interdepartmental discussion and consideration of everyone’s ideas and opinions. These internal discussions must not be considered an invasion of turf, and must remain private. Teams that consistently perform at the highest levels are able to come together and be unified across the organization — staff, players, coaches, management and ownership. When everyone is on the same page, trust develops and teams can grow and succeed together.

“Unfortunately, there has been a departure from this culture. To ensure that the Chicago Bulls can continue to grow and succeed, we have decided that a change in the head coaching position is required. Days like today are difficult, but necessary for us to achieve our goals and fulfill our commitments to our fans. I appreciate the contributions that Tom Thibodeau made to the Bulls organization. I have always respected his love of the game and wish him well in the future.”

Paxson echoed Forman’s sentiments during a news conference Thursday afternoon. “It is our strong belief that there needs to be a culture of communication that builds a trust throughout this organization,” Forman said. “From the players, to the coaches, to the management and to the front office, a culture when everybody is pulling in the same direction. When that culture is sacrificed, it becomes extremely difficult to evolve and to grow. And today’s decision was about giving this team an opportunity to grow into the future.”