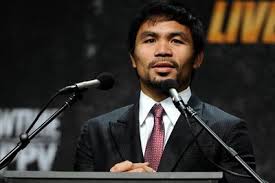 Manny Pacquiao’s promoter, Bob Arum, told reporters last night that Manny would be president of the Philippines. Pacquiao has been a congressman in the Philippine parliament since 2010.

Online bookmakers report that the boxing odds shows  Manny Pacquiao as underdog (57-5-2, 38 KOs) is scheduled to fight Floyd Mayweather (47-0, 26 KOs) first, of course, on May 2nd at the MGM Grand Garden Arena for the Welterweight title.

When it comes to endorsements, there is none better than a former US president. Last year on the Jimmy Kimmel show, Bill Clinton had great things to say about Pacquiao and his future beyond boxing odds.

“[Pacquiao] He’s already in the Philippine parliament and I hope he goes right on up the ladder. I think he’s a great guy and he’s a great role model for the country. He’s very smart and honest, and so he’s thinking about the rest of his life.”

The next Philippine election will be in 2016 and Clinton wasn’t the only presidential endorsement. Current Philippine President NoyNoy Aquino has also endorsed the champion boxer saying he has all of the qualities needed to succeed him, such as fight, a love for his country and integrity and determination.

With presidential terms lasting 6 years in the Philippines, the next election year would be 2022, which would give Pacquiao more than enough time to advance to the senate first.

The fight of the century or the biggest fight in history, whichever your choice, will draw record ticket prices with the lowest seats going for thousands of dollars. The winner will take home more than just a cash prize, but will go down in history.

It’s not just Bill Clinton that supports Pacquiao. Now that Hillary Clinton has announced her run for the presidency, she too will likely be looking for a Manny endorsement.

According to Arum after sitting next to Hillary at a function last year, “she said ‘Bob, I don’t know if I’m gonna run for president but if I do, you gotta get Manny Pacquiao to come over and help me.’”

BTW, don’t forget to check out Pacquiao’s music video that he recorded for his walkout to the fight. Yup, he made a video with all sorts of images of him training, little kids and what not, and sang and directed the thing himself, called Lalaban Ako Para Sa Filipino or I fight for the Filipino. How impressive!