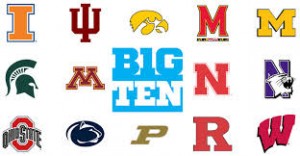 With only 2½ months left until football, the best price per head agents know it is time to start looking over the NCAA Conference Odds.

Last year’s champions, Ohio State, are listed at 1 to 2 in the NCAA Conference Odds, or a bettor would lay 100 to win 50. The Buckeyes have their eye on offensive guard Terrance Davis, but have to battle it out between his home state of Maryland Terrapins, and the close by Michigan Wolverines, as well as the Florida Gators. This weekend a few more great prospects will be visiting, so we may have good news on Monday for the reigning National Champions..

Michigan State Spartans are looking at wide receiver Donnie Corley of Detroit King, who is rated the number 2 player in Michigan and number 79th in the US. So far the Spartans have already commited 19 players, with the multi-talented Trishton Jackson of West Bloomfield the latest to say yes. Jackson can play quarterback, safety and receiver, and will be utilized to his fullest at MSU.

Wisconsin Badgers have already landed linebackers Griffin Grady, Noah Burks and Dallas Jeanty, as well as defensive lineman Tyler Biadasz. Also, Dallas Jeanty committed last week, and the Badgers seem like they are having no problem filling their positions, but they do need cornerbacks. There are a few visitors that are up in the air, so we’ll have to wait and see.

Former San Francisco 49ers coach Jim Harbaugh’s Michigan Wolverines have gone from 100 to 1 to 50 to 1 to win overall, and 12 to 1 to win the Big 10 Conference. The team added offensive tackle Ben Bredeson (Hartland, Wisconsin) and safety Josh Metellus (Ft. Lauderdale, Florida) this week. Bredeson is currently the highest ranked player that has committed to Michigan, but more recruits are on the horizon according to the best price per head agents.

Nebraska Cornhuskers have been rather quiet on their commits, but we do know that defensive end Quayshon Alexander officially committed Friday. As the month passes the best price per head agents will soon know more about just who’s going to be on their roster.