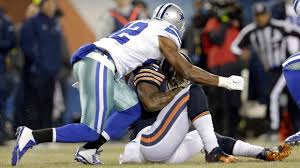 Bears WR Brandon Marshall – who is seen by live betting services as a real talent on the field – will miss the rest of the season after he fractured two of his ribs and suffered an injury to the lung when his team was beaten 41-28 to the Cowboys on Thursday night, leaving many worried fans.

On Friday, the veteran remained in the hospital.

“I went over to the hospital last night to see him,” said coach Marc Trestman “He was in very good spirits. He’s got some healing to do.”

On Friday, the Bears said that the player won’t be able to feature in their game with the Saints taking place next Monday night, and that they have plans to figure out what action should be taken for the WR once they get more input on his health.

Marshall was in an ambulance when he left Soldier Field after the injury that took place in the second quarter of the meeting with the Cowboys.

7:35 were left in the game’s first half, and the WR caught a pass coming from Jay Cutler at the fourth down. Dallas safety Barry Church made the play late, cramming his knee into Marshall’s midsection and back.

“Yeah, it looked kind of [like] an innocent hit. I didn’t see it that well,” said Cutler. “He’s a big guy and has taken a lot of crazy hits over the years. He doesn’t stay down. So whenever he stays down, you know something is seriously wrong. We’re all worried about him. He’s our guy, and hopefully he’ll get back sooner rather than later. He’s in pain. We talked to him at halftime a little bit. They are still checking him out, but he was in good spirits.”

Trainers were attending the WR a short time before he left the field by himself. The player was then accompanied to the team’s locker room, before an ambulance took him to the hospital.

The WR caught the ball three times for 61 yards before he was injured.

This season, the hit taken by Marshall proved to be the third time that the player was injured, missing time on the field. The WR was set back early during the season due to a sprain in his high right ankle suffered in the Bears’ opening game against the Bills. Then live betting services saw that when the team lost to the Packers on November 9, Marshall suffered a left ankle sprain.

Marshall was in forth place in receptions when he joined the game, and the player caught the ball 61 times for 721 yards and 8 TD’s.