Arkansas could beat Georgia this time around 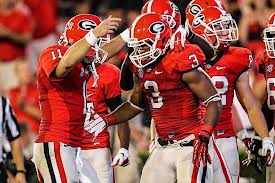 Georgia stunned many fans when they beat Missouri, but the Bulldogs are just 2-5 ATS in the last seven games that they played on the road, and they’re 1-4 ATS in the last five road games in the SEC. In contrast, Arkansas are now 3-0 ATS in the Razorbacks’ last three games played at home, and this includes a meeting last week with Alabama, where the Tide almost lost. Now, many Live betting fans are anticipating a very intense showdown in Little Rock when the Bulldogs take on the Razorbacks on Saturday.

Georgia’s betting line opened with the Bulldogs being the favorites by three points on the road at Arkansas.

In Columbia, Georgia beat the Missouri Tigers 34-0 without the services of RB Todd Gurley, so many experts believe that they should be able to take out Arkansas in Little Rock when both teams go head-to-head. Last week, the Bulldogs outgained the Tigers 379-147,held their opponents to 50 rushing yards, recorded 210 running yards, were able to force five turnovers, and won possession time by a 42-18 margin.

With Gurley out, Nick Chubb had 38 runs for 143 yards and a TD. This season, Georgia, who in the SEC East are sitting at first place, and who are currently 5-1 overall, 3-1, have a 12th placed national ranking when it comes to rushing with 276 yards-per-game, as well as in their running defense, as just 102 yards-per-game were allowed.

Arkansas appeared to have made improvements under the guidance of coach Bielema, bearing in mind that last year they ended up being blown away by Alabama 52-0, but last week the Razorbacks were beaten by the Crimson Tide 14-13. The Razorbacks were actually able to outgain the Tide 335-227, and also were the ones to win possession time by a margin of 34-26, but three turnovers were made by Arkansas, and they had a blocked attempt for an additional point.

The Razorbacks, who this season are 5-1 ATS and 3-3 SU so far, were able to outrush the teams that they took on by a margin of 279-127 yards per game played. Live betting fans saw that they were also able to cover the spread in each one of the games where they could outrush their opponents.