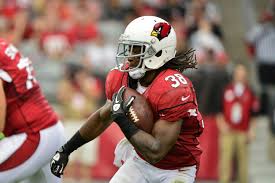 Arizona Cardinals coach Bruce Arians said that Andre Ellington is set to miss practice on Wednesday, as the running back continues to take care of his injured left foot, but many football betting fans are very optimistic when it comes to the player’s condition.

The coach said that Ellington would be wearing a boot on Tuesday, but on Thursday and Friday the player is expected to hit the field again.

Many experts believe that Andre Ellington will make it when the Cardinals take on the New York Giants, and he’s expected to do so. On 13 carries, the player was able to run for 53 yards, and five passes for 27 yards where caught by him when his team beat the San Diego Chargers 18-17 on Monday night.

John Abraham is also a concern for many fans, as the player is going through the league’s concussion protocol after he ended up leaving during the third quarter of the game. The coach said that the player is day-to-day, and his fans hope that he makes a very quick recovery.

On Sunday, the Cardinals lock horns with the Giants.

“That will be his protocol,” the coach said regarding Ellington. “He’ll play on it. He’ll be in a boot to calm it back down and then see how it goes.”

The player surprisingly showed up on the team’s injury report last Thursday due to an injury to the foot, and he had no choice but to sit out for the team’s practice on Friday, but Arians saw that on Saturday Ellington was well enough to be cleared for the game on Monday night.

“It was a big step for him,” the coach said.

“You’re never going to be 100 percent until March,” he added. “As a running back in the National Football League, you forget about it. It’s not happening anymore. He wanted to play.”

Football betting fans saw that Arizona decided to get some backup in case the player gets worse, and they did this when they decided to sign on Tuesday RB Chris Rainey to the team’s practice squad, taking the place of Dominique Williams.

Arians said that Frostee Rucker, defensive tackle who in the first quarter had to leave due to a calf injury, will not be able to practice on Wednesday and is questionable for Sunday’s game.