Adam Wainwright out for season 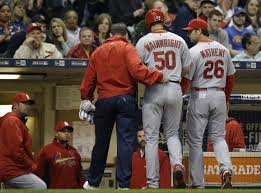 Adam Wainwright, St. Louis Cardinals ace is expected to miss the rest of the 2015 season with an Achilles injury he suffered in Saturday night’s game while running out of the batter’s box. The Cards placed Wainwright on the 15-day disabled list with what they called an ankle injury and Achilles injury. Wainwright is scheduled for an MRI on Monday.

He tried to downplay the injury after the Cards lost to the Brewers 6-3 on Sunday. “There’s nothing I can do about it so might as well not be nervous about it or worried about it,” Wainwright stated. “Worry doesn’t do anybody any good.”

“What was that, top of the fifth inning? It’s going to take a lot to get me out of the game.” Cards manager Mike Matheny said that the loss of Adam would be hard on the team. “I think the test is going to be, with Adam, and everyone in here can see the difference in our attitude,” Matheny said. “We treasure every win we have, but it was different in here last night. We’re just going to hopefully let the guys go back out there and play. They had a little time to think about some of this and the response and the answer is we knew that some tests were going to come. And this is a big one that we’re getting early. Let’s see what we’re made of.”

Pay per head solutions have the Cards at 12/1 and I assume those odds will go down after this injury to the Cards ace of the staff. Even though the Cards are one of the most resilient teams in the MLB as evidenced by the World Series win after star Albert Pujols had left the organization.