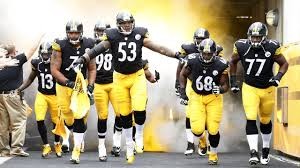 Last year, the Steelers stunned NFL fans everywhere after winning 11 times and clinching the title of the AFC North. Considering the team’s offense, it wouldn’t come as a surprise if they’re able to do this once more. Sportsbook software services believe that the Steelers can accomplish a lot this season, and they put the team as the 12/1 favorites to clinch the AFC Conference, the favorites by +220 for the AFC North, as well as 25/1 for the Super Bowl.

In passing, Ben Roethlisberger a.k.a “Big Ben” was leading the NFL with 4,952 yards. Roethlisberger, RB Le’Veon Bell, and WR Antonio Brown, are creating what could be one of the top trios in the NFL. Brown was at the top of the league when it came to receiving yards and receptions, with 1,698 and 129, respectively. Bell, who’s the MVP for the Steelers, was able to rush for 1,361 yards, and was leading the league in receiving yards by a RB, with 854. Pittsburgh’s offense also doesn’t seem to be slowing down, something that should greatly benefit the team’s defense.

In 12 seasons, this will be the very first time that DC Dick LeBeau won’t be running Pittsburgh’s defense, as he’s now working in Tennessee as their assistant head coach. Keith Butler is the one leading a defense that throughout the last two seasons saw their regular age reduced. Safety Troy Polamalu hung up his boots, as well as CB Ike Taylor as and LB Jason Worilds. LB James Harrison returned to action, but the other starters are young. Pittsburgh also got the services of Bud Dupree, and Ryan Shazier should be the one to start at the inside LB position. Jarvis Jones will most likely work across from Harrison.

Pittsburgh did a decent job in defending the run, which is at sixth place in the league, but unfortunately they had a terrible passing defense. In the season, the Steelers could only record 33 sacks, which is the lowest made by the team since late in the 1980’s.The Steelers’ defense will have no choice but to be more resourceful and make turnovers if the team is looking to win another title in the division and go all the way to the Super Bowl. It won’t be easy at all for Pittsburgh to clinch 11 wins like they did last year, and sportsbook software services believe that a better defense will be vital for their success.